Why You Should Vote

Let’s be honest, the Popular Vote doesn’t determine who wins Presidential Elections – the electoral college does.  That’s true, but there are still plenty of reasons why you should vote for President.  Different people have different reasons why they vote, any many say that it’s because they are actively involved with the democratic election process.  That’s not necessarily true – as the direct vote won’t factor into who wins the 2020 election, but the long term impact could hold more significance.

Politicians will say that you should vote because it determines the outcome of elections, but that’s only true in certain cases.  As recently as in 2000, the Popular vote for the Presidential election did not determine the winner – as George W. Bush lost by approximately 500,000 votes, yet still won the majority of the electoral votes.  So, why should you vote if your ballot doesn’t help pick the next President?

Voting in local elections will have much more of an impact on your day to day life, and structure the US government to choose the Presidential candidates you want to win more over time.  Vote small and think big – and then you should vote big just to feel like you participated like everyone else.

Why You Shouldn’t Vote 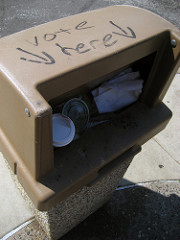 On second thought, not everyone should vote in political elections.  Most voting-aged American’s have had to ride public transportation, work customer service jobs or have been to public restaurants at some point in their lives – so they are aware that people don’t always have the capacity to make educated decisions.  People who simply don’t follow politics or common sense shouldn’t be voting for President in 2020, but they still will be.

This is even more of a reason why you should vote in the 2020 election.  You need to cancel out the votes of people who put their bags in subway seats, can’t read large font signs or understand how lines work.  There are plenty of reasons why you should vote – and you need to determine what those reasons are for yourself.

Voting Online in Presidential Polls Instead

Even if you don’t know who you should vote for yet, you can still vote online in our Presidential Polls now.   If you’re still undecided on who to vote for in this year’s election, make sure to do more research into where the candidates stand on hot topics, and find out if your vote will have any influence in the state you live in.  See you on Election Day, 2020!